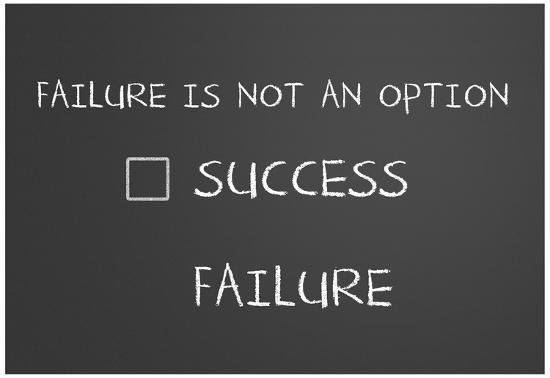 I’ll never forget the day I saw it, carefully placed on the surface of a mirror in a Boston Berklee student apartment. The script wrote, “Failure is NOT an option.” I was instantly hooked. Competitive by nature, my father had cultivated healthy competition within myself, and I topped it knowing that I was a sore loser, especially when games were the subject. Story of my life.

I could never understand why and/or how anyone would be accepting or even appreciative of failure. FAIL = you lost. Something! A race, a game, a position, a seat on a table...something! Why would you want to feel that? It never occurred to me that oftentimes this was inevitable. It’s just not always up to you. Not AT ALL.

That humid Boston summer day though, that knowledge was nonexistent for me. Just glimpses of what I thought at the time was sheer unfairness and not a failure. Like getting a B on a test when you know you deserve an A. That wasn’t a real failure.

And then I grew up. And life was still good when the losses I “mourned” were about politics and maybe football. Getting into startups and business wasn’t a life goal, per se. It came naturally when I changed the path of my studies to be more business and strategy-oriented and inevitably entered the fascinating, rollercoaster world of entrepreneurship.

When I pinned down the problem I was going to solve, I was relentless. I had always been loud, but now I had become louder. I spent my days working and my nights networking with other like-minded people to learn more and more. Everyone seemed so well put together. Everyone was succeeding. I felt that everything was moving slower on my side. Anxiety kicked in on sky-high levels. Soon after, I had my first (and last thankfully) nervous breakdown.

It’s a mixture of a panic attack that meets anger and a feeling of resentment towards others and loathing yourself at the same time ( you were wondering how a nervous down looks like. *Don’t try this at home*)

I recovered thanks to the intervention of one of my best friends, but I knew I couldn’t survive a 2nd. I needed to toughen up! So I decided that when everyone talked up what they were doing, I was going to talk about the struggles. I was going to talk about the bureaucracy that no one told me I was going to face, about how the market struggles when elections kick in, about the clients that will squeeze you dry and take all your ideas and never pay you, about how unfair the game is that supposedly makes things fair for other people, and about how every Monday you will feel like quitting because your life turned into paper-pushing instead of doing what you love. And the inevitable question -” is it worth it?”

*for more failure stories, check out our FAIL OPEN MIC NIGHTS during LEAD CYPRUS SUMMER CAMP in Limassol and in Nicosia!